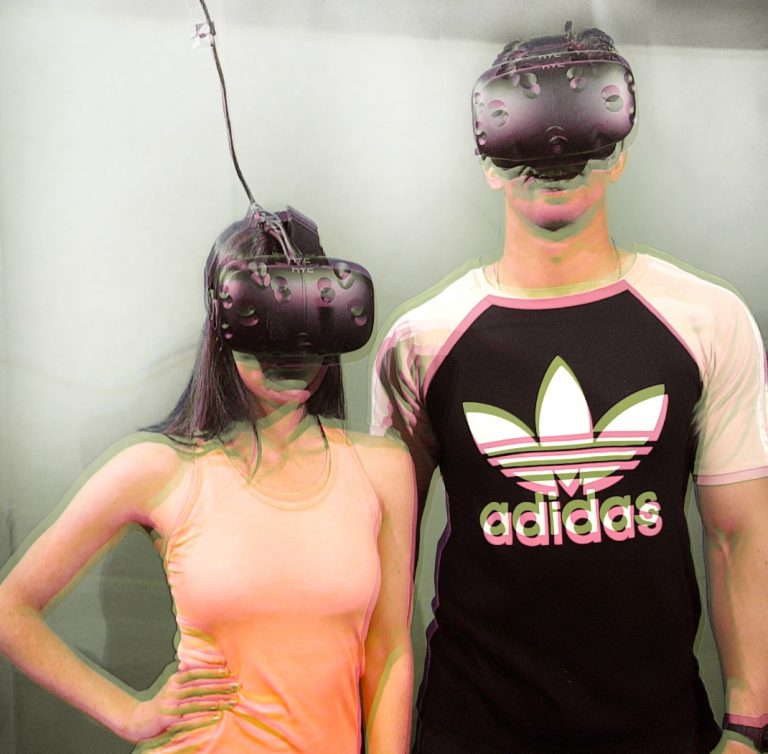 Literally a whole new world, or reality – well virtually, a reality. Nonetheless, we are taking fitness beyond it’s usual realms of capability.

It sounds crazy to think of computer gaming and fitness as one and the same thing. I mean, stereotypically when we think of gamers and athletes, we tend to imagine almost the polar opposite of one another. However, more recently the two have been colliding providing a slightly new take on fitness.

Last weekend, Chris & I were invited to experience one of the UK’s first virtual reality gaming arcades – I guess it’s kind of like the millenial’s answer to American gaming arcades in the 80’s, like off Stranger Things and The Goldbergs

The arcade, VR Here, is based in Liverpool. Though we had no idea what to expect, we were super excited! My only experience of VR was the Playstation 2 Eyetoy (wishy washy was THE one. If you know then you know) which I came to realise was actually called AR – Augmented Reality. That’s right, your girl speaks gamer now.

As I’m sure you are all aware by now, I really do not enjoy cardio so, I was really curious to see whether a) Virtual Reality would make it any more appealing or fun and b) whether it could totally replace traditional cardio. See ya later treadmill. Adios Stepper. Asta La Vista spin bike.

So last Sunday, Chris & I rocked up to VR Here which is just outside the centre of Liverpool with no real idea as to what to expect. Thankfully, it was super easy to find and parking was free. Winner. Those who know me know I hate paying for parking.

When you step through the door, you are where the magic happens. There are three cubicles set up and one cubicle that doubles as a green screen (you’ll see why at the end of this post).

We were greeted by Bryan who was very friendly and wasted no time in transporting us to new dimensions. To give us an idea as to what to expect and get us used to the feeling of VR, we first experienced being under the the sea. It was actually super magical, I could have sat there for hours just pondering life.

Now, I must warn you guys. If you are expecting screams and shrieks from me you’re going to be disappointed. I thought I would be brave enough to handle a zombie game but I totally am not. biggest.wimp.ever.

I did watch Chris on a couple of games though. Which was hilarious. I mean at the end of the day, he was stood there with a mask on, looking around and reaching out to touch things that weren’t there. There was a TV outside of his cubicle though so, we could see everything he could see with on the headset.

Bless him, he braved a couple of scary experiences. One of which including falling from the top of a skyscraper. Now, not gonna lie, I did have a WTF moment when I saw this. Like, I get the creators wanted you to experience falling but I wonder if there was a less disturbing way of achieving that, maybe like cliff jumping or something. I dunno.

He also got hit by a bus at one stage which was actually really funny to watch because he fully braced himself for the impact. Obviously, it was only funny because there clearly wasn’t going to be any impact but that’s just how real it feels when you have the head set on. You are fully immersed into this whole new reality.

Time for the fun stuff that I can enjoy too…  the games.

The first game we played was called BeatSaber. Probably one of the most hyped up games going and I can see why. You have probably seen clips of people playing this game going around on Facebook. I fully loved every minute of it. Almost felt like living out my dream of being a jedi master, mostly because of the lightsabers though. Honestly, could have spent hours on that game. Chris enjoyed this game a lot aw well and it’s one I can see us getting really competitive over! That game was more for a fun experience though rather than as a cardio replacement.  Bryan very kindly made us a mixed reality video – press play below.

If you want to see some behind the scenes of that, they are at the end of this post.

The next game was way more suitable as a cardio workout. Box Fit. Now let me tell you guys, after one round of this the SWEAT was REAL. Like oh my days that was a fun little workout. I guess it makes sense though, it’s just a more intense, more fun version of boxercise and I was SO on board with it. I could definitely do that for cardio everyday rather than going to the gym and using a CV machine.

If you’re worried about the sweat on the headsets by the way, Bryan made sure that he used antibacterial wipes on them after every single time we used them, not when we were finished but every.single.time we removed it from our face!

There are elements of the VR systems that would make good substitutes for some types of workout but for weight lifting and muscle building based programs, it doesnt even skim the surface. Sorry guys, looks like you’re gonna need to keep that gym membership if you want muscles. That being said, you can obviously still work up a sweat on the VR games just having fun without the focus even being on exercise.

Chris and I played a couple of fun games from Hollowball, which is basically squash inside of an 80’s style game full of neon lights, funky music and old school but amazing effects, to virtual reality Paintball which by the way, I won at!

It’s crazy that although Chris and I had separate headsets on and were in separate cubicles, we were actually playing against each other and could see each other. Obviously, when I say see each other I mean our avatars which was actually awesome. We had been Robots, cartoon style men, had big boxing gloves on, had lightsabers – all within the space of about 90 minutes!

As I hope you’ve gathered so far, we were LOVING our time there. I was panicking thinking I was going to end up an internet sensation due to my hysterically dramatic, over-the-top reactions but actually, it all went really smoothly – still with lots of laughter though obviously.

There were only two occasions in which I did not feel comfortable. The first being in the Shipwrecked edit of the under the sea experience which I mentioned above. Although there is nothing particularly jumpy or any real reason to get your heart racing, I just found it a rather apprehensive position to be in and didn’t like it. Perhaps it was because this version was a bit dark and I am afraid of the dark? Who knows. It is crazy how real it gets though. Unlike augmented reality or home VR (which are actually AR apparently) systems, there is no way of reminding your senses that it isn’t actually real so, as far as they are concerned you are fully immersed in this world. Amazing and scary all at the same time.

The second ocassion I had to take the headset off and snap back to reality (if you don’t have an Eminem song in your head right now who even are you) was for a game that Bryan wanted to show me. Unfortunately, I lasted a grand total of about 3 seconds. I do wish I could have lasted a bit longer in this one as it would have been another way to work on fitness whilst in VR as with this game, when you jog on the spot your avatar runs in the direction you instruct. Almost immediately though, this game made me feel sick and I’m pretty sure I lost my balance with it. Bryan said this was because the calibration wasn’t totally successful, as we were running out of time, and that’s why it made me feel ill.

Perhaps next time, I give the game a second chance.

All in all though, Chris and I THOROUGHLY enjoyed our time at VR Here and I will definitely be scheduling in a few cardio sessions and  taking my little brother for a fun day out.

If you want to give it a try but aren’t sure it’s for you, they offer free 15 minute taster sessions between 12 and 2 on Sundays but you do need to book – which you can do so here.

As promised, here is a peak at the mixed reality behind the scenes.. let me know what you think.