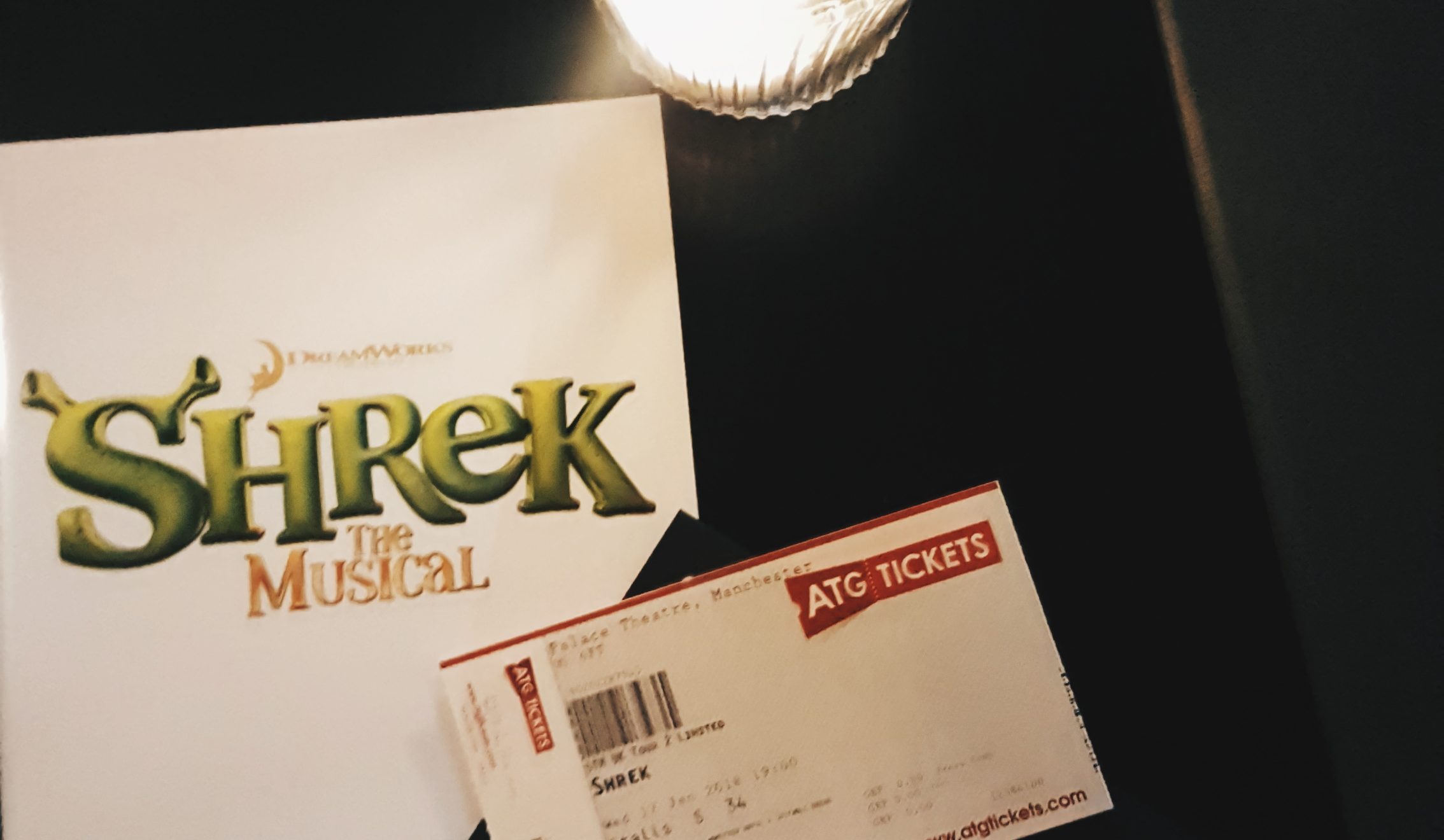 Thanks to WeBlogNorth, my brother & I were lucky enough to attend the press night for Shrek The Musical at The Palace Theatre, Manchester.

As baby brother (Ellis) and I don’t get to spend much time together, we kicked the evening off with dinner at Gorilla. Taking full advantage of their 50% January Discount. Considering Ellis had just told me that his ultimate ULTIMATE meal would be Burger King burgers, McDonalds chips and KFC popcorn chicken. Here I was thinking I was going to take him somewhere different where he could enjoy some ‘real’ food for Ellis, true to form, to order ‘Le Big Mac with Bacon’. *Facepalm*. Thankfully, the standard of food in Gorilla was much higher than that of a fast food chain so, I didnt feel like a complete failure! I opted for the vegan white bean and beetroot burger. I’m not normally a fan of ‘veggie burgers’ but this one, I could eat every night of the week! It was delish!

My brother was trying to order a desert before the mains even arrived so, I thought I was being rather cunning when I said “you can have a desert if you eat all of your main”. He’s 9. The mains were huge and he normally orders off the kids menu. He ate every.last.bit. and still wanted a desert of course! So we shared a brownie. Cute.

Time for the main event…

With our bellies full and the excitement building, we walked/skipped towards the swamp far, far away (a.k.a The Palace Theatre) to pick up our tickets at The Stage Door bar where we were also given a pair of Shrek ears, or as I was later corrected by Ellis “Princess Fiona” ears. Now anyone who knows me knows I am all over photo opportunities, never wanting to miss a snap but this was a bit intimidating even for me. With the paparazzi snapping away in front of the press board with many of the cast of Hollyoaks in attendance, I completely understood why Ellis felt a bit overwhelmed at this stage. He eventually agreed to have a picture though and even put on his Shrek ears!

We headed to our seats in the stalls of this stunning, traditional looking theatre with a huge green book taking centre stage. SO BLOODY EXCITED!

From the moment the show began we were engrossed. From the costumes, to the set, to the sheer creativity in every element of the stage – it was fantastic. And that’s before we even got to the production itself. It is so well written. In all seriousness, I thought I was long past laughing at fart jokes, far more mature now that I’m 26 but the my brother and I both had streams of tears down our face from laughing at the fart scene says otherwise.

In the movie, Donkey is my favourite character and Marcus Ayton taking on the role in this stage production perfectly encapsulated every essence of Donkey – right down to the accent and mannerisms. Just brilliant.

BUT.. then there is Lord Farquaad, who in the movie plays a fairly feeble role despite being a pivotal part of the storyline. In this production however, Lord Farquaad played by Samuel Holmes simply STEALS.THE.SHOW. We get to see so much more of the character and his cunning, devious ways. He truly is the cherry on top of the already jaw droppingly good sundae. Sorry Shrek & Fiona, it just aint about you guys any more. I wouldn’t be surprised if there was a Lord Farquaad spin off production in the works actually.

Without giving too much away because this really is a show you need to experience first hand, you can expect lots of disguised adult humour, current affairs, a mixture of fairy tales very cleverly rolled into one and not forgetting ‘the moral of the story’  – Let your freak flag fly! Whether your going with or without children, it is a fabulous evening and you will all be crying with laughter.

Just as a side note, if you are going to be attending with children though, I suggest you get to your seats extra early to check visibility. My brother couldn’t see from his original seat and was unable to get a booster seat until the first interval which would have been a major issue if it wasn’t for the kind gentleman at the end of the row switching seats so he could see. (Thank you kind gentleman!)

If you want a bit more of an insight as to what to expect, take a look on the production website for some photos and videos (it’s worth a peek)

For those who have been to see it, I’m curious as to who your favourite character was and why? Let me know in the comments below!

Though the tickets were gifted, these words were not. They are entirely my own. My views, my experience, and my tears of laughter. I hope you enjoyed x