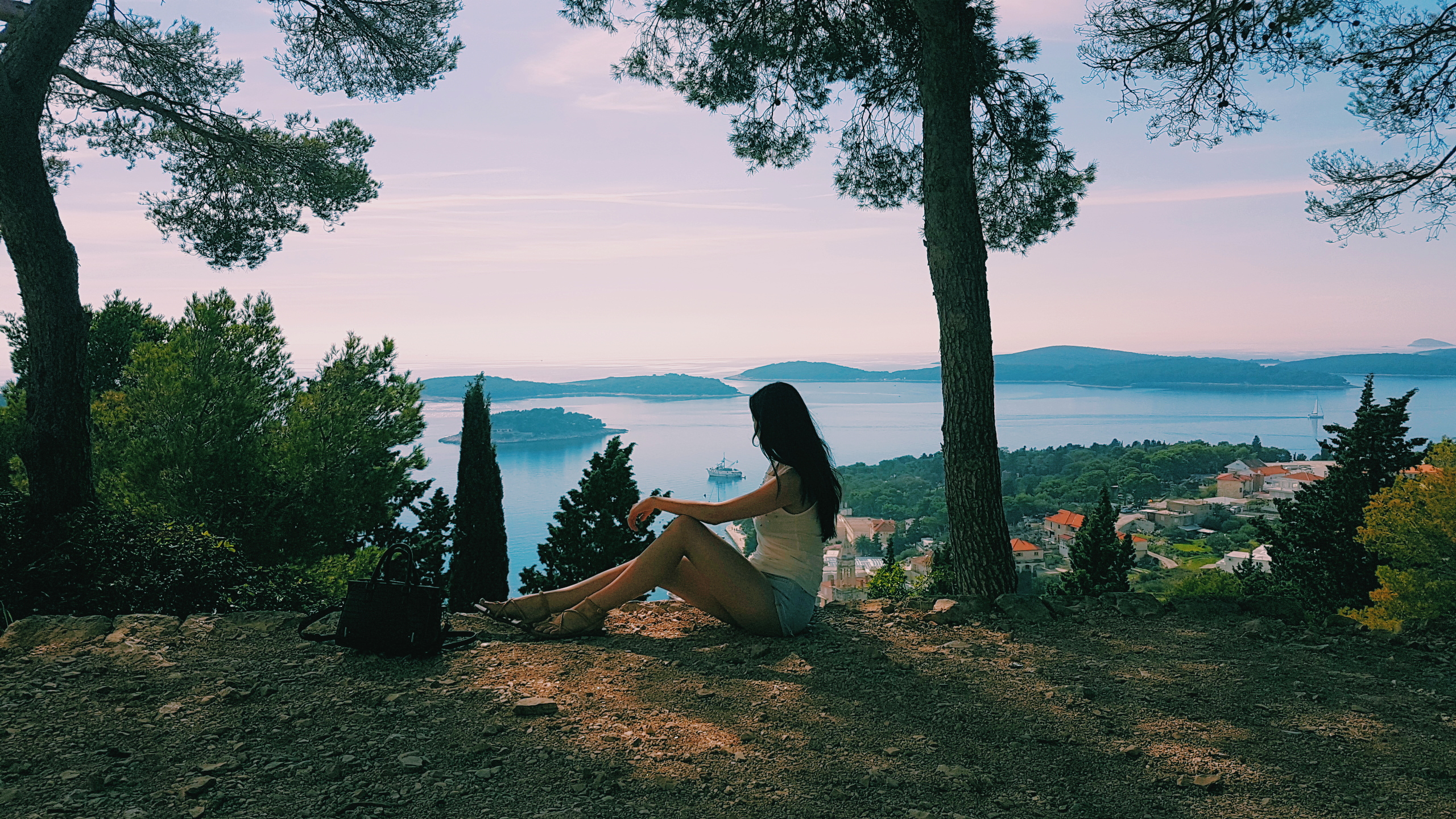 Legend has it that three is a magic number.. and boy are the legends right because day 3 in Croatia was maaaagicaaaaaal.

As I mentioned on the previous Croatia blog, today was boat trip day! Yaay!

You know when you fall asleep in the sat up and wake with a startle everytime your head rolls forward, yeah? well that was how the first half hour of our time at sea went! The lack of sleep was catching up to us. I need my full 8 hours guys, what can I say!

By the time we woke, the mainland was well and truly out of sight. I love being on a boat but this was the first time I had never been able to see dry land. For a short period of time it was fine but we were sailing long enough for me to realise that the pirates life was indeed, not for me.

Roughly 5 minutes before arriving at our first destination, Hvar, we were ushered onto the boat deck because “we would not want to miss this”. As we began pulling into the harbour, it was clear to see what our guide, Borris meant. What a stunning little island this is. As the boat was docking, it was like the island was calling us to explore down its winding paths, up through the trees of the hills, into the shops and restaurants – so that’s exactly what we did. It would have been rude not to!

Originally, we set out looking for souvenir shops. Chris and I are so in love with it here, we wanted to bring a peice of it home, but we were so engrossed with exploring the winding streets and climbing stairs that we actually ended up hiking to the castle at the top of the hill.

A brilliant mistake with views so beautiful I can’t even begin to describe. Although, sandals and denim shorts were most definitly not the appropriate hiking attire. By the time we got back down my calves were on fireeee. Totally worth it, in fact, for want of a better phrase, two birds one stone; an adventure and a workout. Does a better duo even exist?!

Hvar kind of file like a Labyrinth, with twisting narrow paths leading somewhere other than they seem and hiding their own quirky little secrets. Maybe that’s why I loved it so much. The Labyrinth is one of my all time favorite films and I did always want to play the part of, Sarah. Hmmm, does that make Chris, Hoggle?

Sat on deck relaxing after our hike, everyone was chatting amongst themselves and I heard this little whisper from Chris, you know like when someone is thinking out loud “wait, was that a dolphin?” The excitement was already building up inside me as my eyes scanned back and forth across the vast adriatic sea hoping. praying. that Chris was right. DOLPHINS! There they were, I saw them with my own very eyes, DOLPHINS! WILD DOLPHINS PLAYING IN THE SEA. I thought I had contained my excitement but soon the rest of the boat were huddled around my and I’m pretty sure there were only a couple of people on the mainland that didnt hear my excited shrieks.

This was a bucket list experience that neither one of us expected to check off the list during this mini-vacay. They literally came so close. Jumping over the little waves, weaving in and out, twirling and dancing. Honestly, I feel physcially incapable of conveying how overjoying this experience was for me. Even sat here telling you all about it now, I have the biggest smile on my face. like bigger than a 5 year old that got a real life unicorn for Christmas. Absolute magic.

By the time we arrived at the second island and hiked over its pretty paths (oh my poor calves but again totally worth it) to the restaurant, I still hadn’t calmed down. Part of me thought I was going to be too excited to eat buuut this is me we are talking about and I can ALWAYS eat.

From the trees we emerged into Toto’s restaurant which was expertly hidden in the hill. It overlooked the beach on the other side of the island. The design here was exceptional, it blended perfectly into the surroundings as oppose to demolishing the area and building upon it. Something that everyone commented on actually because it was beautifully done. Through palm trees, our table had a glorious view of the seas and the boats docked whilst people jumped off and swam. Probably the most spectacular lunch time view I have ever experienced. It was breath taking.

For lunch, I ordered the bruschetta to start and the sea food ravioli for main. I managed to snap a pic of the bruschetta but ended up inhaling the ravioli because it was so good! Apologies for not getting a pic to share. Croatian’s love their food and so far it seemed as though food came out in absolute abundance here but not today. The one day I was actually so ready for so much food. The portions were really quite small, usually this would be perfect for me but my poor athlete boyfriend, I’m surprised he didnt order a further two meals! Despite the portion sizes though, the food was gorgeous.

Around 2 hours later, the food was finished, I had calmed down, and we had recovered from our hike which also translates to swimming time. For the boys anyway. I was happy just paddling today. The water was so crystal clear, I’ve genuinely never seen anything like it and I have lived in Alberta, Canada – home to Lake Louise and the Bow Valley River!

Here in the Adriatic Sea, I could see right to the floor no matter how deep it got. The fish were fearless, swimming around our legs without a care in the world.

I did pick up a couple of pieces of plastic for the bin which made me realise that, that was the first time I had actually seen any litter here in Croatia! Well done Croatia!

Even with the boats pulling in and people jumping off them, the commotion going on to the left of us where somebody had fell through the jeti, the kids, the restaurant even with all that  this tiny little beach was so peaceful. For ages I just paddled round watching the fish, listening to the gentle waves. So calm. A stark contrast to the chaos of moving house and our other project back home!

There was a glorious sunset view as we travelled back to Split, unfortunately when the sun did go down. The ride back seemed to take forever. It was freezing cold and we were surrounded by nothing but black. By the time we reached the hotel we could no longer feel our hands or feet. A quick change and a dash to the restaurant for dinner before it closed.